Los Angeles Unified School District (LAUSD) is the second largest school district in the nation. It boasts a diverse student population, a multitude of schools (approximately 900), and reaches beyond the city limits to serve students in 31 smaller, surrounding municipalities. What makes LAUSD even more unique is their focus on racial integration.

In order to meet the needs of their diverse student population, prevent racial isolation, and prepare students to navigate an increasingly more globalized society, LAUSD’s Student Integration Services Office finds ways to provide more choices to students and their families. The office serves as a support system in matters concerning the socio-economic and cultural diversity represented by the district’s student population – this includes compliance and policy issues as well as the creation and support of magnet spaces within the district.

The office’s director, Keith Abrahams, has been involved with LAUSD for 31 years (including his years in the system as student). He says that, “LAUSD has a large population of high achieving students from low socioeconomic backgrounds.”  His office works hard to support this population and see to it that they are continually engaged and achieving at high levels. Much of what the Office of Student Integration Services does is incredibly personal to Abrahams. His experience as a student in the district informs his approach to supporting diversity across the district today. 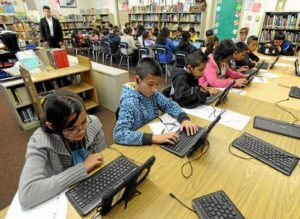 Understanding and appreciating students from socio-economic and cultural backgrounds other than his own had a huge influence on Abrahams as a student. He says,  “It wasn’t until I reached college that I realized how much of an impact diversity in the classroom had on me. Many of my college friends struggled with an adjustment period in college, largely because they had limited exposure to people who were not like them. I didn’t experience that same adjustment period.” For this reason, integration is crucial to student development, and the ability to embrace others of multiple backgrounds will give students a leg up throughout college and their working lives. Abrahams has dedicated his career to supporting diversity in LAUSD from the very beginning.

Abrahams began his teaching career as an educator in 4th and 5th grade at a non-magnet elementary in LAUSD, then eventually moved on to be an assistant principal in a magnet. Finally, right before he became the Director of Student Integration Services, he served as a principal at a non-magnet. In each of his experiences in the classroom in LAUSD, the schools he worked in employed a variety of programs and traditions to celebrate diversity including diversity assemblies, discussions about social injustice among upperclassmen, and more.

Abrahams’ unique understanding of Los Angeles Unified, the district’s distinct strengths and specific challenges, and passion for providing opportunities and equitable educational choices for all students lead him to his work with Student Integration Services. However, no man is an island. Abrahams attributes the success of his office and the district’s magnet programs to his team.

Magnet Schools of America is proud to partner with Los Angeles Unified this month for our 35th National Conference on Magnet Schools. We hope that you will come and see some of the many innovative tools LAUSD educators use in their classrooms, and learn more about how you too can accommodate the needs of diverse students firsthand.