The single largest form of public school “choice,” magnet schools are visionary, innovative and open to all students regardless of zip code. With 4,340 schools educating 3.5 million+ students nationwide, each school typically focuses on individually themed curricula.

The educational themes that some magnet schools focus on include,

Magnet Schools attract children of various socio-economic backgrounds, race and academic achievement levels. They are free and open to anyone; due to high demand, most schools determine student acceptance by a lottery system. Magnet schools are accountable to state standards and, in many cases, exceed those standards.

It is the soft skills, however, of teamwork, acceptance, innovation and engagement that make magnet schools the vibrant environment it is for developing positive citizen children prepared for future careers and successful community engagement. This real-life preparation has students not only interacting with peers from all backgrounds, but with hands-on experience working with businesses, cultural institutions, universities and community organizations.

How are magnet schools different than charter schools?

Excellence in academic enrichment is the key to successful college admission as well as to career accomplishments. Magnet schools, however, also enrich students in ways that create a positive effect on the community at large.

Through a more harmonious and healthy interaction to various cultures and socio-economic backgrounds, to developing a deeper understanding of community that comes from hands-on interaction with corporations, non-profits, cultural and academic institutions, students are exposed to a microcosm of the world at large, learning skills of interaction, team building and cooperation.

This positive integration imparts life skills that reach well beyond the classroom. Students of every learning level end up using these experiences in their future pursuits of higher learning and in their work life. Magnet schools close the achievement gap, improve racial harmony and empower all students to reach their individual potential. 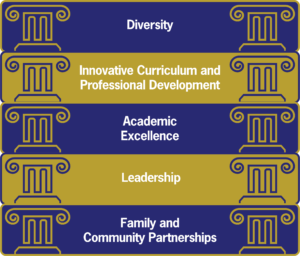 Magnet Schools are founded on the five pillars of diversity, innovative curriculum and professional development, academic excellence, leadership and family and community partnerships.  The synergistic relationship of these five equally held tenets is not merely a foundation, but a compass moving our students/children forward to a well prepared future.

The 1960’s served as a wellspring of great change – politically and societally. Along with that change was the movement to desegregate school systems and offer equal opportunities and access to superior education to students of every socio-economic level.

But, as Dr. Donald Waldrip describes in his article on the history of magnet schools, the very first “super” high school came about in Dallas, Texas in 1971.

“Designed around the concept of career strands, skyline High School attracted students of all kinds – rich, poor, Hispanic, African American, Asian, White – from all over the city. It even offered adult classes in the evenings. In fact the school rarely closed its doors. Some students came for a full-day program; others came for part-time; still others came after school.”

Waldrip explains that around the same time in Houston, Texas, when describing the effect of its Performing and Visual Arts School, “said that it worked like a “magnet” in attracting students.”

By 1975, the term “magnet” had caught on so well that in just four short years, that the federal government, contemplating fiscal assistance, was using the term.

Waldrip, whose full article is linked here with many more specifics acknowledges that while magnet schools are still used to improve diversity and reduce segregation, they have rapidly become superior options within the public sector for all students, even in districts of primarily one race.

The history of magnet schools, their popularity and dispersion, is directly tied to the early protests of the 1960’s addressing educational inequity and amplifying the need for educational reform by way of public school “choice.”

Today, these schools have emerged as educational beacons in communities, incorporating themed curricula, hands-on, experiential learning, a diverse tapestry of students and academic requirements that often exceed those of the school district or state.