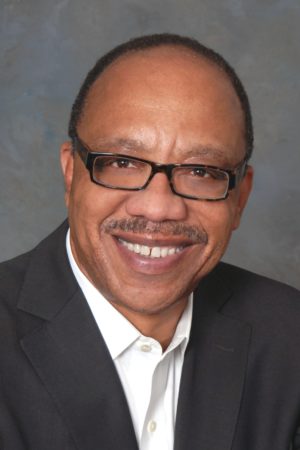 Eugene Robinson uses his twice-weekly column in The Washington Post to pick American society apart and then put it back together again in unexpected and revelatory new ways. To do this job of demolition and reassembly, Robinson relies on a large and varied tool kit: energy, curiosity, elegant writing and the wide-ranging experience of a life that took him from childhood in the segregated South—on what they called the “colored” side of the tracks—to the heights of American journalism. His remarkable storytelling ability has won him wide acclaim, most notably as the winner of the 2009 Pulitzer Prize for his commentary on the 2008 presidential race that resulted in the election of America’s first African- American president.

3In his three decades at The Washington Post, Robinson has been city hall reporter, city editor, foreign correspondent in Buenos Aires and London, foreign editor and assistant managing editor in charge of the paper’s award-winning Style section. He has written books about race in Brazil and music in Cuba, covered a heavyweight championship fight, witnessed riots in Philadelphia and a murder trial in the deepest Amazon, sat with Presidents and Dictators and the Queen of England, thrusted and parried with hair-proud politicians from sea to shining sea, handicapped three editions of American Idol, acquired fluent Spanish and passable Portuguese and even, thanks to his two sons, come to an uneasy truce with hip-hop culture.

He saw, long before the states were split into red and blue, that politics and culture are always
intertwined. He sees how the great trends that are reshaping our society are also reshaping our
neighborhoods, our families, ourselves. Immigration, for example, is far more than a tally of how many people moved from somewhere else to America. It’s also the story of a changing inner-city block that rises or sinks as newcomers arrive. It’s the story of how the grammar and syntax of a new hybrid language are forged in basketball or soccer games at the local playground. It’s the story of a woman, all but cloistered in her home country, who walks down a public street for the first time in her life without a veil. Or the story of a man, raised in society where machismo still rules, learning for the first time to regard his wife as a breadwinner, perhaps eventually as an equal.

Using the old-fashioned instincts and habits of a reporter, Robinson goes out and finds these stories. He sees them as the foundation that supports his provocative opinions—and as building blocks that can be used to assemble the larger narrative of today’s America.

Robinson was born and raised in Orangeburg, SC. He remembers the culminating years of the Civil Rights Movement—the “Orangeburg Massacre,” a 1968 incident in which police fired on students protesting a segregated bowling alley and killed three unarmed young men, took place within sight of his house just a few hundred yards away. He was educated at Orangeburg High School, where he was one of a handful of black students on the previously all white campus; and the University of Michigan, where during his senior year he was the first black student to be named co-editor-in-chief of the award-winning student newspaper, The Michigan Daily.

He began his journalism career at The San Francisco Chronicle, where he was one of two reporters assigned to cover the trial of kidnapped newspaper heiress Patricia Hearst, which arguably set the pattern for all the saturation-coverage celebrity trials that have followed. F. Lee Bailey, at the time the most celebrated lawyer in America, was lead counsel for the defense. He lost the case, which taught Robinson a valuable lesson he has never forgotten: Reputation and performance are two different things.

Robinson joined The Washington Post in 1980 as city hall reporter, covering the first term of Washington’s larger-than-life mayor, Marion Barry. For the first time since Orangeburg, race became a dominant issue in Robinson’s life—as city hall reporter, he was the de facto emissary of a powerful white institution, The Washington Post, to an ambitious, race-conscious, black-run government of a majorityblack
city. There he learned another important lesson: Man-in-the-middle is never a comfortable role, but sometimes it’s a necessary one. Robinson became an assistant city editor in 1981, and in 1984 was promoted to city editor, in charge of the paper’s coverage of the District of Columbia. During the 1987-88 academic year, on leave from The Post, Robinson was a Nieman Fellow in Journalism at Harvard University. He began studying the Spanish language—he had always promised himself that if he ever had a year off he would learn Spanish, since that would be useful for any journalist in a nation where immigration from Latin America was already gathering steam. Study of the language quickly led to courses on Latin American literature, history and politics.

On his return to the paper he was named The Post’s South America correspondent, based in Buenos Aires, Argentina, a post he held from 1988-1992 (which let him cover the trial in Amazon and also research his first book, the one about Brazil, Coal to Cream: A Black Man’s Journey Beyond Color to and Affirmation of Race, published in 1999). For the subsequent two years, he was London bureau chief (affording him the opportunity to sit in one of the gilded state rooms of Buckingham Palace as Queen Elizabeth II committed the investiture of a new crop of knights and ladies).In February 1994, Robinson returned to Washington to become The Post’s foreign editor. That same year he was elected to the Council of Foreign Relations.

In January 1999, Robinson became an assistant managing editor of The Post in charge of the Style section—where he learned that hip-hop and American Idol are as relevant to people’s lives, in their way, as the “serious” news that gets reported on the front page. His appointment as associate editor and columnist took place January 1, 2005.

In 2010, Robinson was elected to the Pulitzer Prize Board. He is a member of the National Association of Black Journalists and the NABJ Hall of Fame. His second book, Last Dance in Havana: The Final Days of Fidel and the Start of the New Cuban Revolution—an examination of contemporary Cuba, looking at the society through the vibrant music scene—was published in 2004. His latest book, Disintegration, was released in October 2010. In it, Robinson discusses the disintegration of the black community into four distinct sectors—and the implication for policies such as school reform, urban renewal and affirmative action.

Robinson is a regular contributor to MSNBC. He lives in Arlington, Virginia with his wife, Avis, an artist and collector.