MSA Superintendent of the Year 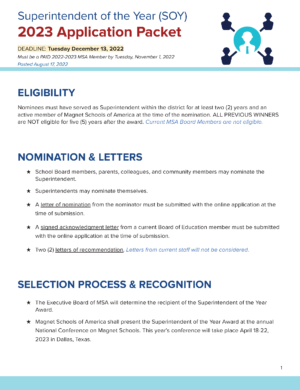 MSA’s 2022-2023 Superintendent of the Year application packet is available. 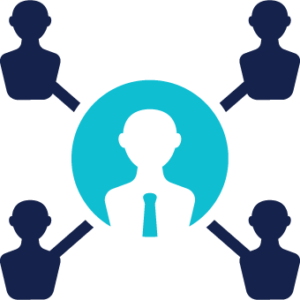 Leadership, commitment and involvement are three descriptors that capture the essence of the qualities Magnet Schools of American (MSA) seeks in candidates for the MSA Superintendent of the Year.  Those eligible to be nominated

NOTE: Previous winners within the last five years are ineligible for nomination.

Annually, the Magnet Schools of America (“MSA”) will select a MSA Superintendent of the Year based on superintendent’s: strong leadership skills, particularly in developing and supporting magnet schools/programs; commitment to improving the quality of education in his/her school district through the development and implementation of magnet programs/schools that are of high quality and that have diverse enrollments; commitment to the support of magnets at the local, state and national levels, involvement in education, and ability to build good employee relations among teachers and staff members.

Nominees must have served as Superintendent within the district for at least two (2) years and be an active member of Magnet Schools of America at the time of the nomination. ALL PREVIOUS WINNERS are NOT eligible for five (5) years after the award. Current MSA Board Members are not eligible. 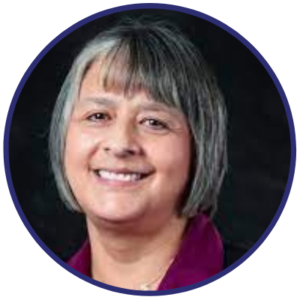 This annual award recognizes the important work of leadership within our school districts to keep magnet schools a priority in the portfolio of school choice options.

Cathy Moore has been superintendent of Wake County Public School System for the past 3.5 years. The strongest recognition of Superintendent Moore’s commitment to students, staff, families, and community partners occurred in 2018 when the local Board of Education’s changed her contract from an annual renewal to a rolling two-year contract. In 2019 and again in November 2021, the BOE extended her contract for two additional years. The BOE noted that this move was done to [publicly demonstrate their support and confidence in Cathy Moore’s leadership.

2020 Superintendent of the Year ◊ Dr. Michael A. Grego 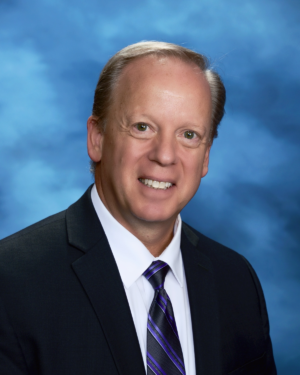 This annual award recognizes the important work of leadership within our school districts to keep magnet schools a priority in the portfolio of school choice options. This year’s winner – Superintendent Dr. Grego’s dynamic and visionary leadership has led to record graduation rates, monumental school improvement, and successful efforts to narrow the achievement gap. 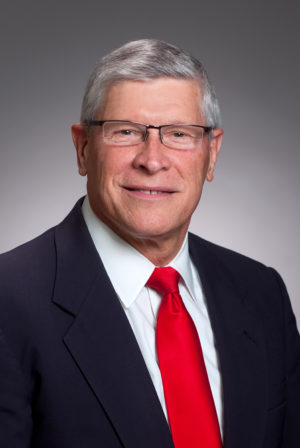 This annual award recognizes the important work of leadership within our school districts to keep magnet schools a priority in the portfolio of school choice options. This year’s winner – Superintendent Warren Drake – recognizes the importance of school choice and the role of magnet programs in the East Baton Rouge Parish School System. He has supported the expansion of magnet schools and increased the number of seats where possible to ensure parents are provided with additional choice options.

The East Baton Rouge Parish School System has 28 programs serving students from three years old to high school seniors. The programs were instrumental in helping the school district achieve unitary status in 2007, which ended one of the longest-running desegregation cases in the United States. 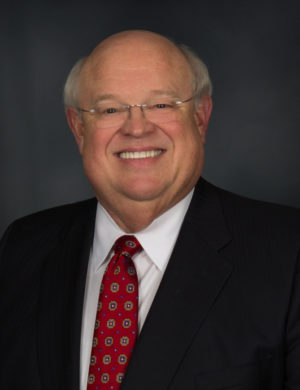 This annual award recognizes the important work of leadership within our school districts to keep magnet schools a priority in the portfolio of school choice options. Dr. Hefner’s unyielding focus on expanding school choice by creating magnet options in District Five has been the catalyst for school improvement districtwide. Spanning nearly 30 years, Dr. Hefner has facilitated the creation of numerous magnet schools and programs in two South Carolina districts, many of which have been recognized by Magnet Schools of America as Schools of Excellence and Schools of Distinction and achieved designation as Nationally Certified Magnet Schools. In District Five, Dr. Hefner has also helped school leaders secure two multi-million dollar federal Magnet School Assistance Program (MSAP) grants, including a $10.3 million grant in 2013 and a $13.7 million grant announced last fall.